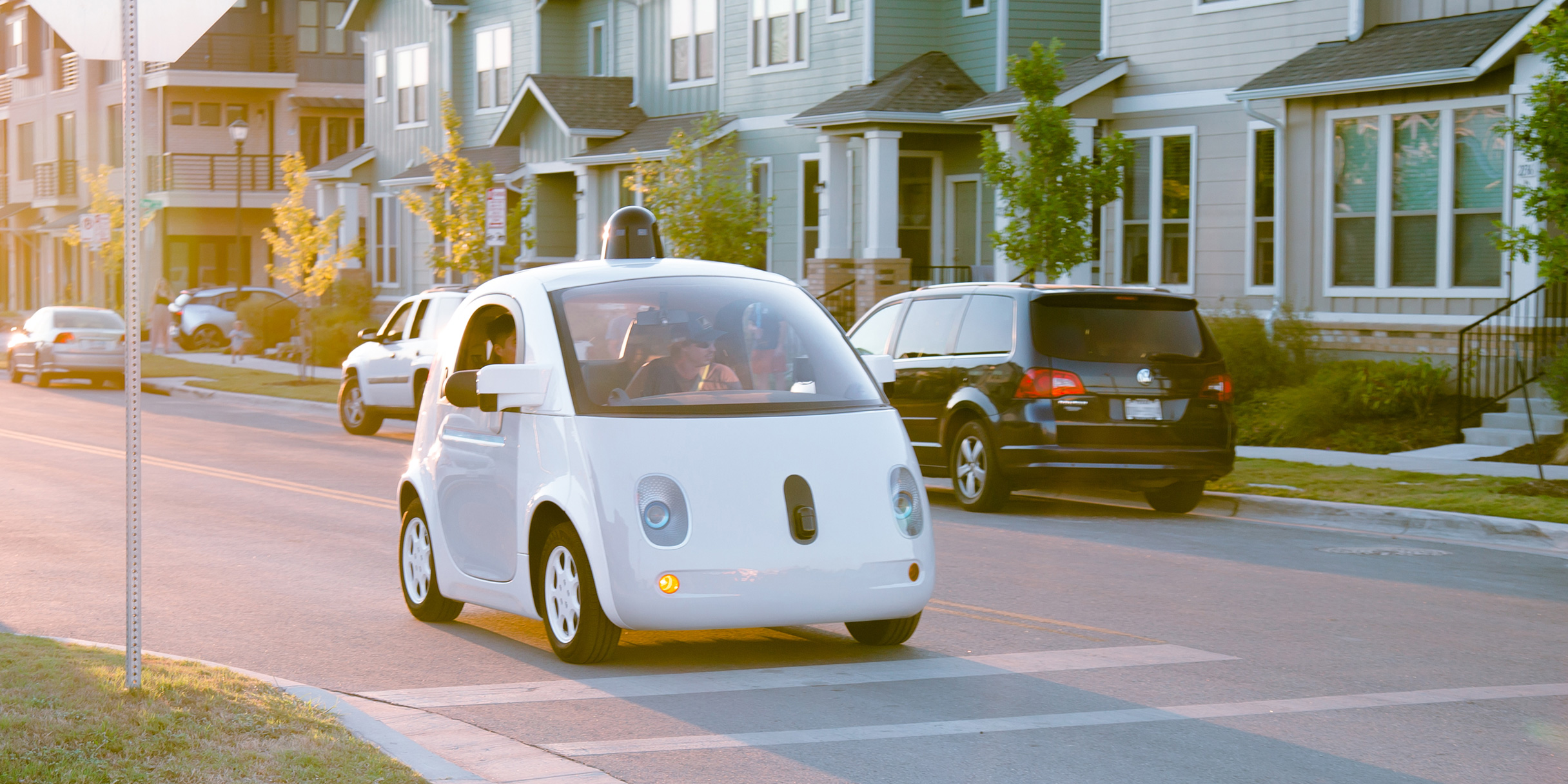 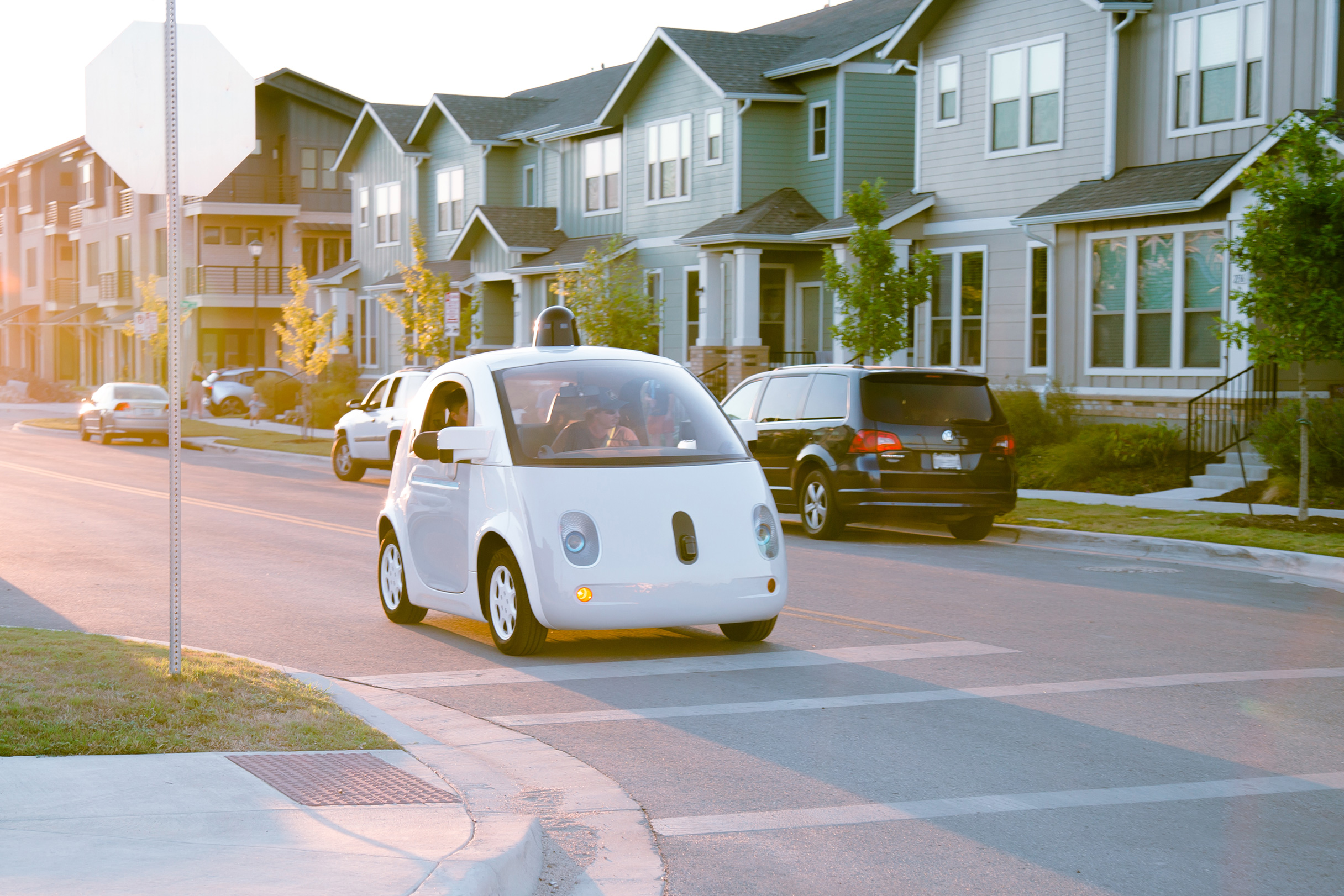 Last fall Google was asked to participate in the museum’s newest show, California: Designing Freedom, which opened on May 24th. Organized by Justin McGuirk and Brendan McGetrick, the show examines California’s unique design history and global influence from the 1960s to today, and includes several objects from Google’s design legacy, including Material Design icon maquettes, an original Google Cardboard prototype, a display illustrating software tile layering in Google Maps, and a full-scale Waymo self-driving car model (aka “Firefly”). There is also an interview with our VP of Design Matias Duarte in the catalogue of the show, published by Phaidon. I recently caught up with the co-curators to get an overview of the project.

Rob Giampietro, Google Design: What made you first interested in California? Why now? Why the London Design Museum, specifically?

Justin McGuirk, Chief Curator, London Design Museum: So many of our daily experiences and interactions happen through screens of one kind or another. This realm of the screen is a whole new genre of design, one that was pioneered in California, and it needs more acknowledgment in design museums. Whenever California is represented in a design museum, it's often about mid-century modernism from Schindler to the Eameses in the 1940s and '50s instead of being more contemporary. We decided to start just after that, with the counterculture, and from there you can see a clear and now quite well-documented trajectory to the tech culture of today.

We wanted to show the influence of companies like Google and Apple on design culture, without doing a technology show per se. We thought it'd be interesting to talk about the idea of California, maybe even more than the place itself.

Brendan McGetrick, Co-Curator, London Design Museum: Our thought was also that if we could understand the singular point of view that connected all of this work that's presented in the show, we could give people an opportunity to imagine where things from California might be headed in the future. 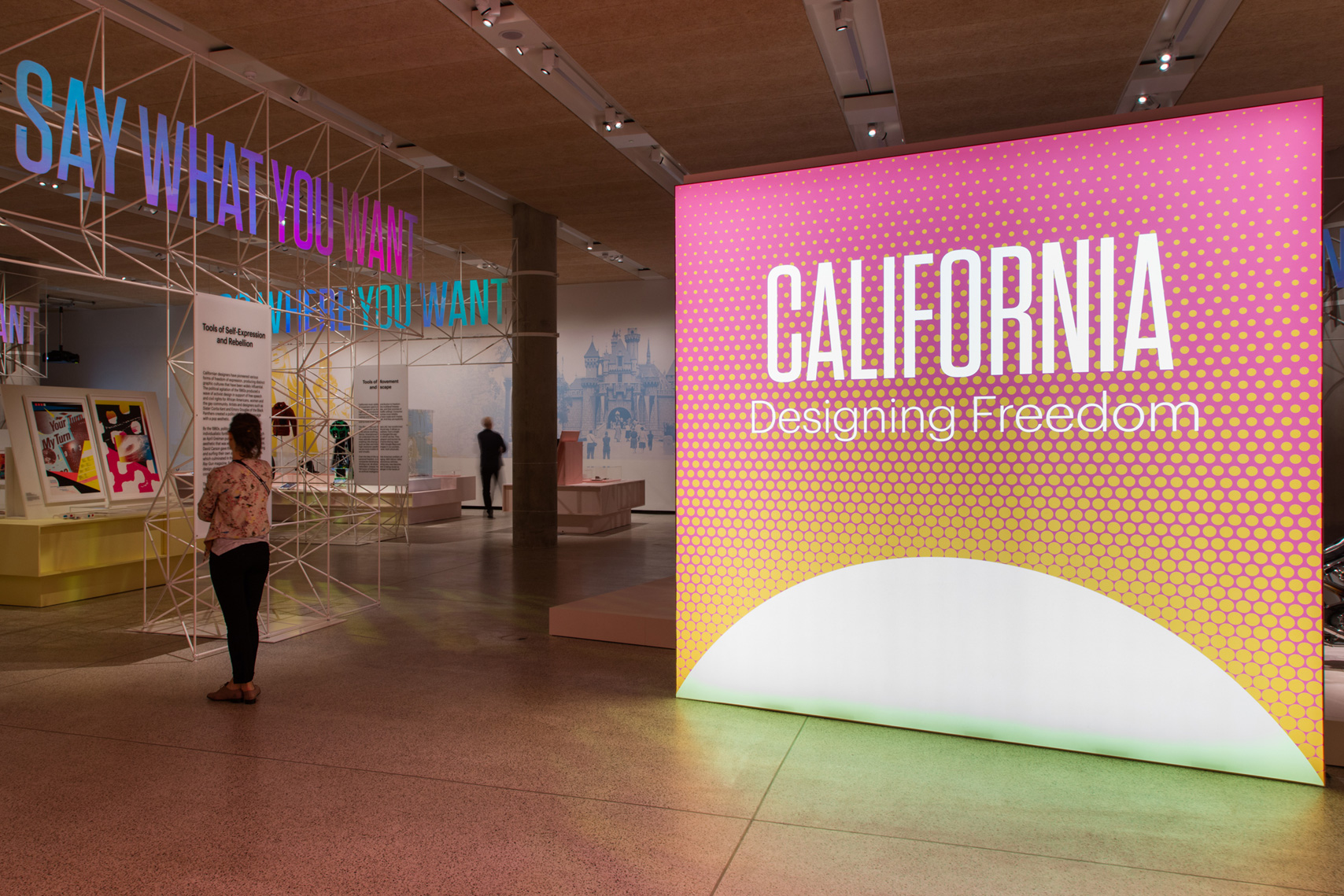 Rob: So the show is both contemporary and historical. It looks at how the present has arrived for us. Even though the show has a location as its organizing factor, it seems like that location is actually almost a conceptual idea. I was thinking about the California Tourism Board's slogan, "Living the Dream."

Brendan: Yeah, 'designed in California' isn't a style, it's an attitude, it's a state of mind.

Justin: We have a very clear theme, which is “tools of personal liberation.” The idea is that California has specialized in democratizing technologies, making corporate and military technologies useful and empowering to the individual. It starts with things like LSD and geodesic domes, which are really tools of the hippie movement and the counterculture, but which began life in laboratories and as structural systems that were fairly arcane. LSD frees your perception, it's a tool of consciousness. The geodesic dome becomes this symbol of an alternative, non-hierarchical society.

This then morphs into the hacker culture and the computer culture in the late ’70s and 1980s. The show charts the ways in which the ideology of the counterculture finds a new direction and a new group of people. Some of the earlier utopian impulses take on more technological and capitalistic drives.

Brendan: We tried to divide the show into different forms of empowerment or different kinds of abilities. We have the five sections: Say what you want, See what you want, Go where you want, Make what you want, and Join who you want. We wanted to acknowledge that these things are trying to expand the users’ possibilities in different fields of life. Movement, perception, expression, community, and connection become social and design principles at once.

Justin: If you look at the marketing of all the tools through the 1980s to today, this idea of portable computing, of mobility, of the freedom to be able to do anything, anywhere, it's a recurring mantra.

Rob: Could you each point to a highlight from one of these sections and dive a little more deeply into its inclusion in the show?

Brendan: One of the first things you see when you walk into the exhibition space is Power Up, which is a silkscreen print by Sister Corita Kent. She was a practicing nun who pioneered a politically-charged form of pop art. She collaged together slogans from advertisements and scripture and speeches and newspaper articles and images from magazines. Power Up is one of her most famous works which is originally taken from an oil advertisement from the ’60s, but it obviously precedes and is perfectly in harmony with language about powering up your computer, for example.

There are also important artifacts from the Free Speech Movement (FSM) at UC Berkeley. We have a speech by the leader of FSM Mario Savio from the mid ’60s that speaks out against reducing people to punch cards at a time when computers were mainframes the size of rooms and belonged to governments and corporations, not individuals. The FSM used punch cards to write protest messages, and these are in the show. Some of these questions and concerns have echoes in the present day.

We also have the original gay pride flag by Gilbert Baker who recently passed away—it was introduced in California, but it has global, even universal relevance now. In that same section we have, for instance, copies of Ray Gun magazine by David Carson and examples of April Greiman’s work, which are not political in their messages, but in terms of the way they look and the arguments they make about how a magazine should look, they are demanding and celebrating freedom of expression. 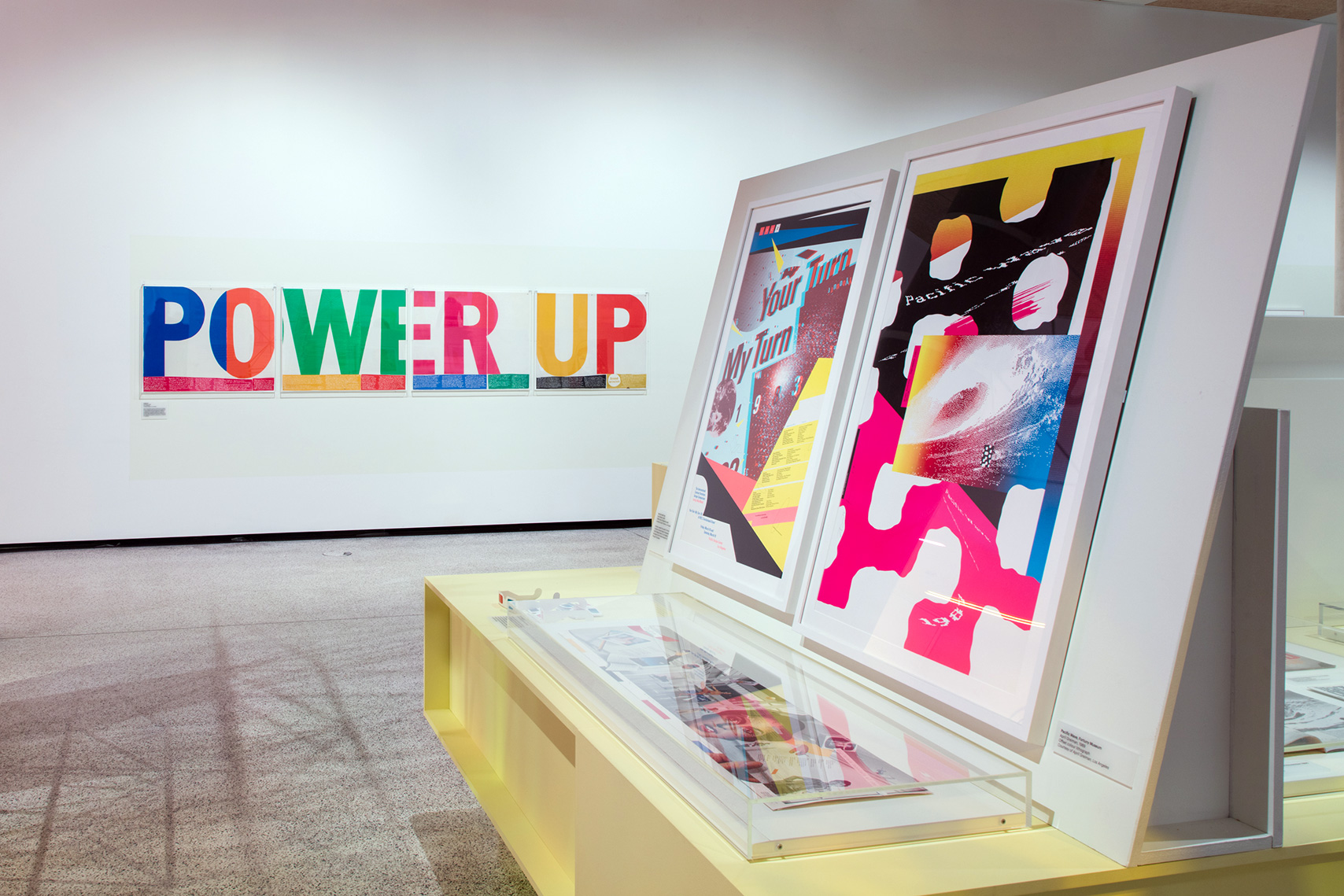 Sister Corita Kent's Power Up (1965) alongside some select pieces from designer (and SPAN 2017 speaker) April Greiman.

Rob: Carson and Greiman’s work feels very connected to Sister Corita’s earlier efforts by means of collage. It sounds like you’d almost describe her as a cultural “hacker.”

Brendan: She was taking excerpts from Playboy magazine interviews and then combining them with Bible passages and images of the Viet Cong. Perhaps she’s a “proto-hacker.” A better example of hackers—and we also have this in the show—is the blue box that Steve Wozniak and Steve Jobs made to hack or “phreak” into the phone systems and make free, long-distance calls.

Justin: The "See what you want" section is fun, and actually one of the most surprising in the show, because it explores this idea that California is a place that manufactures fantasy, and a place that creates new tools for new media, new ways of seeing the world. One thinks of Disney, Hollywood, all the experiments that are happening now with VR. This is a place that manufactures images and has different ways of creating images. We've included a number of original LSD blotter paper designs in the show, not as a recreational drug, but as something that influenced the aesthetics and the music of the counterculture. We're connecting LSD and something like Google Glass, as forms of vision or tools of perception.

There's also a work by the Environmental Communications Group, which was an architecture and media collective celebrating LA car culture. This vernacular culture was initially despised and labelled “anti-city,” but through critics like Reyner Banham and the work of the Environmental Communications Group in the 1970s, the billboards and the highways and the suburbs and the beach culture—what makes LA “LA”—start to be celebrated as a sprawling postmodern metropolis, the opposite of the European model of a city with a center. And this newer concept of a city reverberates in people like Syd Mead, who created the original concept art for Blade Runner in 1980 and painted yet another picture of LA as this dystopian, futuristic, Pacific Rim city, now itself a common backdrop for depictions of the future. 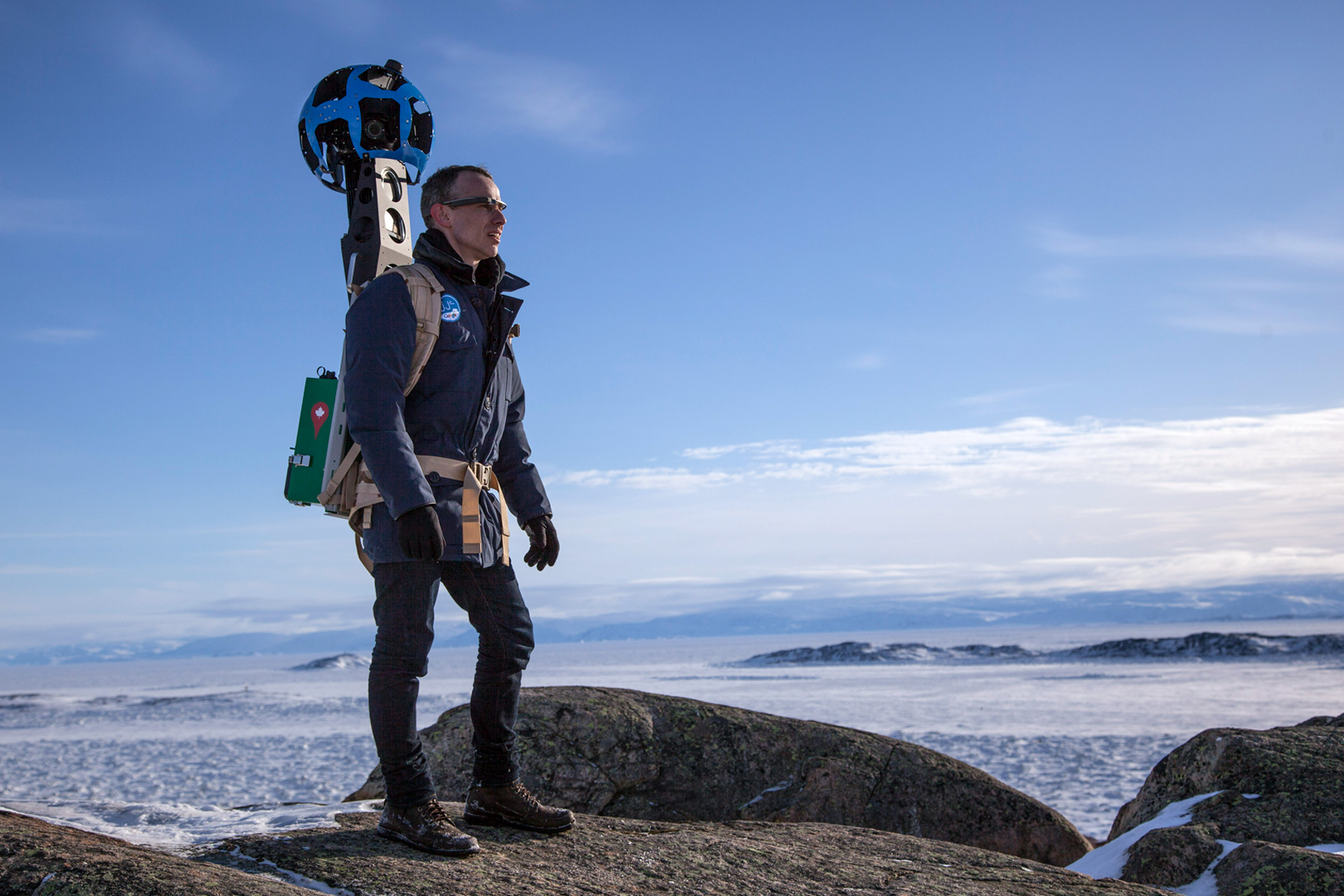 Aaron Brindle in Iqaluit, Nunavut, Canada. The Trekker unit is a wearable backpack system that allows image-gathering in locations that are only accessible by foot.

Rob: How do you do that for design that’s not a poster or a print or something you can show on a wall? What are the challenges in displaying software design, for example? 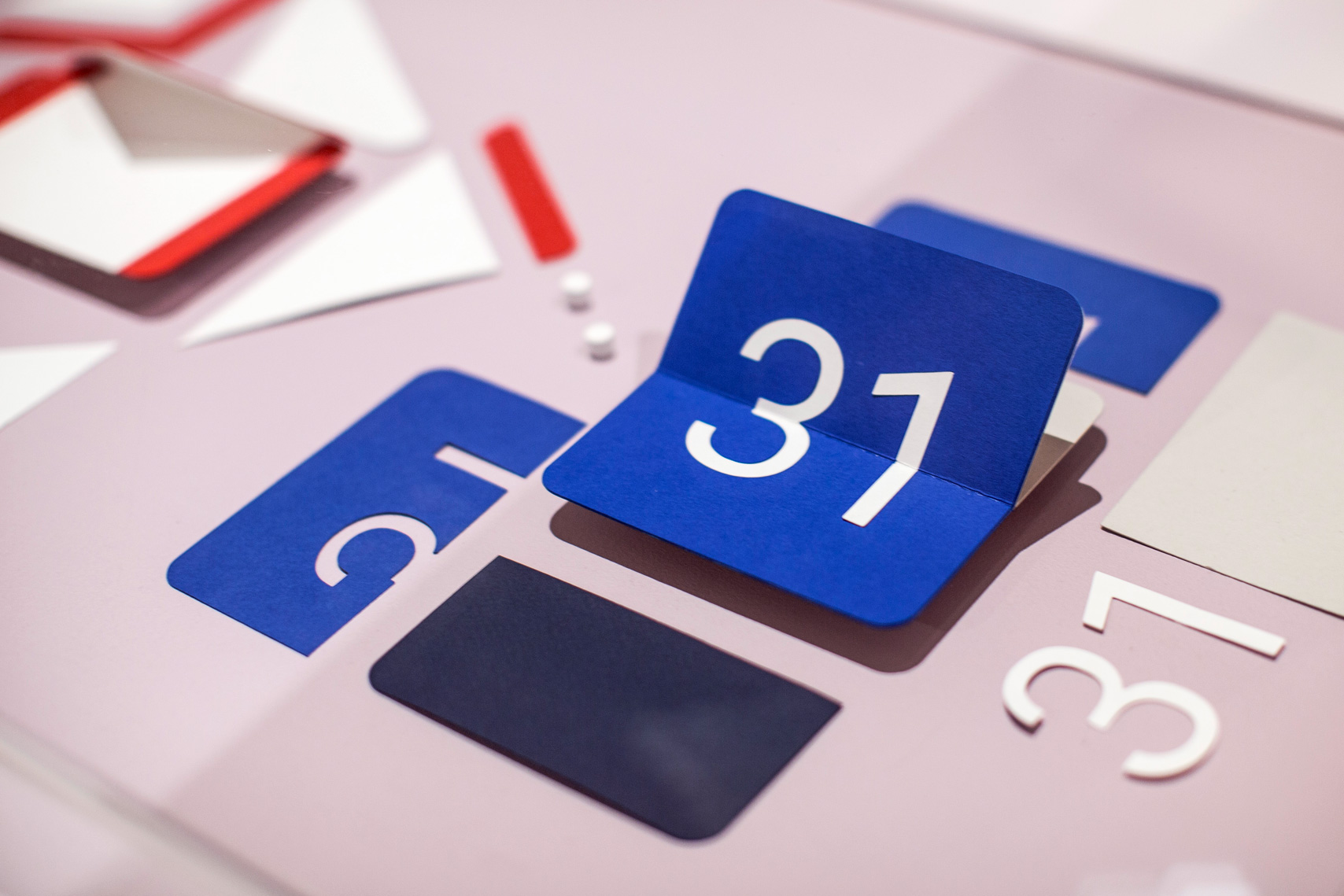 Rob: The architectural critic Mark Wrigley talks about “Architecture as a communication medium,” and obviously that resonates. There are many connections between architecture and interface design, we’ve had a few thinkers on this at our annual Design and Technology conference, SPAN. Maybe we'll look back and see the difficulties we have in showing interactive work now as trivial in 20 years time. Or maybe it will take longer, the display of architecture took centuries to evolve.

Brendan: I think we're acknowledging the complexity of these things. We're very careful not to make a naïve, booster-ish show, but we also are careful not to make a cynical fearful show. We're trying to take these things at face value, present them for how they have presented themselves, for how the people who made them believe they function, and indicating here and there the unintended consequences in an attempt to evaluate them honestly. That's an ambiguity, for ourselves and for the visitors, that we are perfectly happy with, because again, it's evocative of the freedom and the open-endedness that California has advocated.

Justin: I think that’s well said. There's a lot of very obvious critique of Silicon Valley. People are scared of data and of surveillance, and not necessarily always rationally. You can enjoy these tools and use them to their fullest and still be critical of them. We’ve tried to avoid any kind of critical hypocrisy though. California is, as I've said, somewhere else. It has spawned two great screen cultures. One of them was the silver screen and the other one is the pixelated screens that we use every day. You might say we’re all Californians now in the way we use social media, or photograph ourselves and document things constantly. This culture is global, and it has clear roots and ties to a very particular place. That is its contradiction. 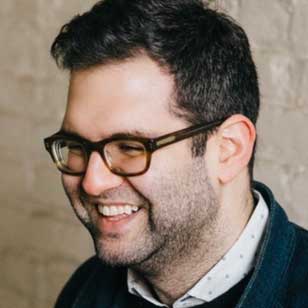